I went to vote at the last general election with a heavy heart as I knew full well that my vote wouldn’t really count towards the result as I live in a safe seat. Straight after voting I felt really angry about the whole system and whilst out walking my dog the idea came to me that I must be able to work out how much my vote didn’t count – you see if you make a statistician angry he tries to fight back with numbers.

So how did I calculate the Voter Power Index? Well I figured there were two main factors that would illustrate how much or little power voters had. The first is how marginal the constituency you happen to live in is (the more marginal the more power) and the second is how many registered voters there are (fewer voters means each individual vote counts more). The problem was how to estimate exactly how much power you have in a particular constituency. I decided that if I looked at as many elections as possible I would be able to figure out what was the probability of a seat changing hands for different levels of marginality. By creating a probabilistic model I could then estimate this probability for every constituency and hence calculate (to three decimal places) the Voter Power Index. The details of all the calculations are available in the original report but much more fun is that web designer Martin Petts has created an interactive web-site so everyone can see how much their vote is actually worth.

I must admit that even I was staggered when I first calculated the VPI just how much most people’s votes don’t count. It is clear that our current system is hugely inefficient at translating the will of the people into the result of a general election. In fact the VPI allows us to put a number on the level of this inefficiency - the current system is only 25% efficient – whereas some sort of proportional representation system would approach 100% efficiency (for example the 2004 European Elections were about 96% efficient). Not only is the system inefficient it is also chronically unjust with Voter Power very unevenly distributed in the UK, with the luckiest 20% of voters having over 33 times more power than the unluckiest 20% - the graph below shows this spread. Note that this is a far more uneven distribution than household income in the UK. Even before the redistribution through taxes and benefits – the richest 20 per cent of households 'only' earn 15 times as much as the poorest. After redistribution this inequity factor is reduced to under 4 times.

The Voter Power Index shows that the first past the post system is profoundly undemocratic in that it gives considerably more power to some voters than others and so betrays the fundamental principle of democracy – one person one vote. It is high time we changed the whole rotten system.

The Voter Power Index was first published as the Index of Democratic Power in a 2005 report called Spoiled Ballot and published by NEF (the new economics foundation). 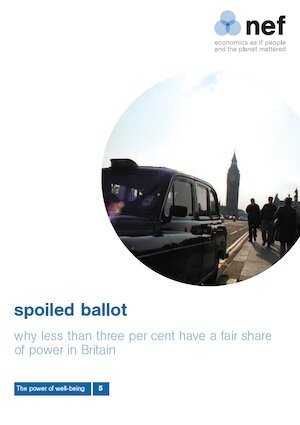